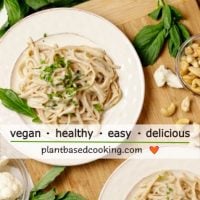 One of my most popular recipes on the website is the Cauliflower No Cheese Sauce and this Cauliflower Pasta Alfredo uses that as an inspiration. Instead of adding nutritional yeast and turmeric to make it an orange cheese color, this recipe uses potato and raw cashews instead to retain the light color of traditional Alfredo sauce.

However, with this plant-based Alfredo version, you eliminate fattening and unhealthy dairy and cheese, but still retaining a beautiful flavor. In addition, you create creaminess with the addition of raw cashews.

You don't need to soak these, however, as you just toss them with the cauliflower and potatoes to soften before blending. This saves a step. I keep my raw cashews in the freezer to keep the oils from spoiling and toss them right into the broth.

If you'd like to keep the calories lighter, you can add 1/2 cup of non-dairy milk instead of the raw cashew and reduce the broth by 1/2 cup.

For this version of Cauliflower Alfredo Pasta the sauce is not super thick because otherwise, it will become too sticky. The sauce tends to thicken as it cools a little and will vary depending on the size of your potatoes.

When adding a sauce to pasta, I've found that the sauce needs to have plenty of flavors because the pasta tends to make the sauce taste blander. Alfredo sauce is usually a subtle flavor, but if you want to pump up the flavor a little more, try the addition of 2 tsp vegan Worcestershire sauce.

The steps to making this easy recipe are to simmer the cauliflower, potatoes, raw cashews, and garlic in the vegetable broth until tender.

Then, when cooled, toss all of the vegetables, including the broth into a blender and blend until smooth. Now add the other spices, mustard powder, lemon juice, and salt and pepper.

I'd love to hear your feedback in the comments below for this Vegan Cauliflower Pasta Alfredo! If you have a photo, post it on my Instagram page, tag me using the hashtag #plantbasedcooking in your caption, and I won't miss it!

Print Recipe
Cauliflower Pasta Alfredo
This easy-to-make vegan cauliflower Alfredo pasta is easy on waste, as well and you can even take it in one pot if you cook the sauce in the same pan as the pasta. Use a blender to make the sauce creamy! 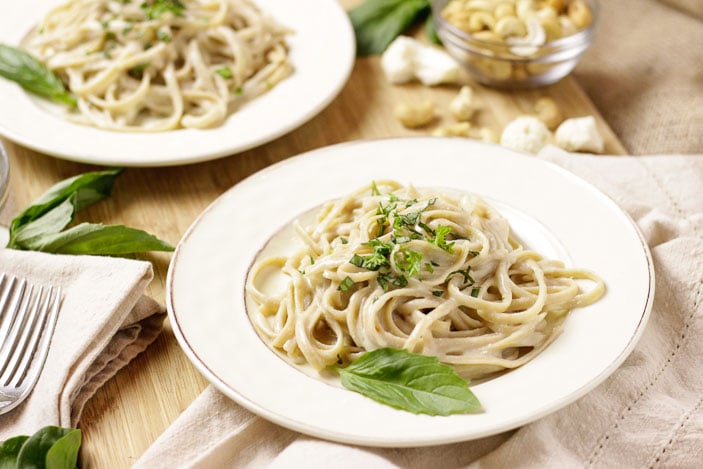 Votes: 11
Rating: 3.64
You:
Rate this recipe!
Add to Meal Plan:
This recipe has been added to your Meal Plan
Ingredients
Instructions
Nutrition/Notes

Servings: This recipe makes about 5 cups and leftovers can be used as a topping for vegetables, baked potatoes, or as a soup. Optional Additions: 1 1/2 cups green peas tossed into the sauce to warm 1/2 lb raw spinach added into the sauce and allowed to wilt.

Salt and optional ingredients not included in label