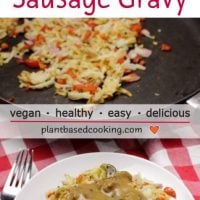 Are you cravin’ yourself some tasty country hash browns and gravy, but just don’t want the added fat? Well, my friend, you’re in luck because you can make these beauties with nary a touch of oil! Yep! And, you can even make it easier with store-bought frozen hash brown. Just be sure to check the package that there is no added oil. 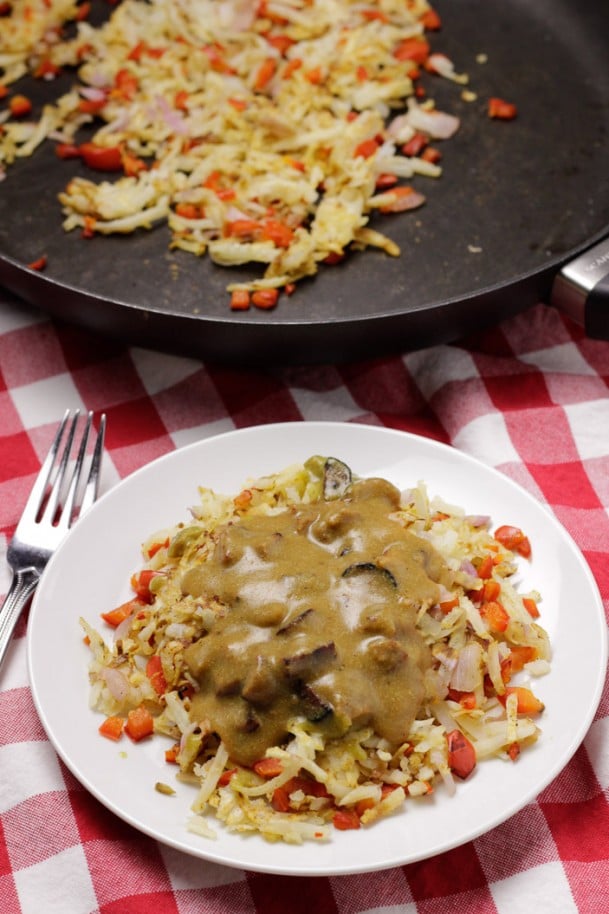 You will have to put in a little elbow grease for the Easy Gravy, but that’s actually a fast recipe, too. Once you have all of the ingredients gathered, whole wheat flour, nutritional yeast,  Tamari (or soy sauce) onion powder, veggie broth and a little non-dairy milk, you just need to add them to the pan and stir.

If you like your gravy on the whiter side, omit the vegetable broth and only add non-dairy milk. If you want your sausage to be brown, you can brown it in a separate pan. 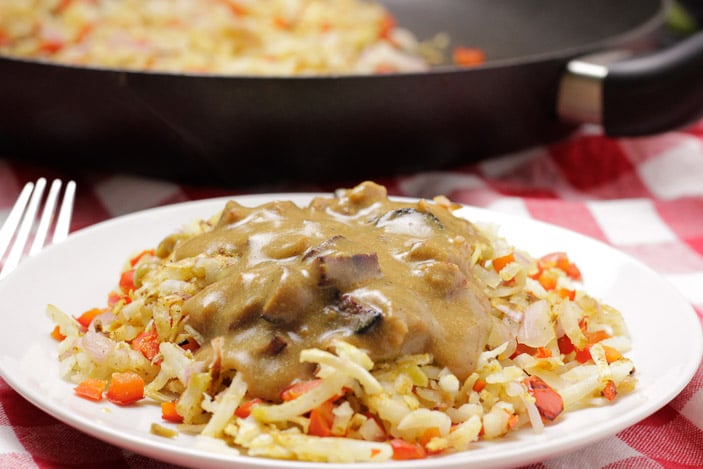 If you’re craving breakfast, be sure to check out these recipes:

And, did I mention, you will need a non-stick pan, but that’s something everyone who eats a plant-based diet should have.

My favorite is the Scan Pan brand but there are many on the market. If you’re looking for other essential items for your kitchen, check out the new store with my personal favorites and you’ll help support plantbasedcooking.com if you do purchase anything there.

So, for the hash BROWNS. Well, in order to make them nice and crispy, put them into the pan without any oil or butter, and leave them for quite a few minutes, checking the bottom after a few to see if they’re browning.

If not, give them a few more minutes, then add the chopped peppers and onion, stir around and let them sit again. You can repeat the stir (or flip) until you get your desired crispiness.

I’d love to hear your feedback in the comments below for this Country Hash Browns with Sausage Gravy Recipe! If you have a photo, post it on my Instagram page, tag me using the hashtag #plantbasedcooking in your caption, and I won’t miss it! 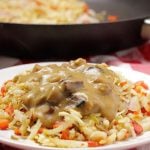 Crispy, golden hash browns are easily made without butter or oil and brown nicely in a non-stick pan. Then top them with an easy vegan sausage gravy. Serve for breakfast or dinner.
Prep Time30 mins
Cook Time15 mins
Total Time45 mins
Servings: 4 people