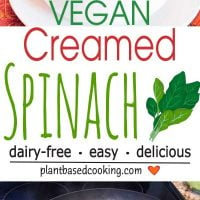 This flavorful vegan creamed spinach is so yummy, you won’t believe it’s vegan. Yes, it is possible to make a delicious, creamy spinach vegan recipe without added fat or bacon.

Let’s be honest, we love the taste of fat and bacon but we know it’s not in the best interest of our health. So, are you willing to try something new or are your taste buds still adjusting?

How to make vegan creamed spinach

This creamed spinach vegan recipe is so creamy you won’t miss all the unhealthy fat. Coconut milk is good in this dish but you can make this vegan creamed spinach with almond milk or use one of the other options listed. If you’re feeling experimental you could even add some spice or try a bit of curry.

You could try a spin on the Indian dish, saag paneer but without the cheese they use. By adding the Indian herbs and spices you’ve kept the same great recipe but now with a wonderful new flavor profile. This is a great way to get this vegan creamy spinach recipe in rotation on your weekly meal plan, you won’t regret it.

If you’re moving in the direction of eliminating animal products, good job! I know at times, it’s not easy. Sometimes you struggle with the little devil sitting on your shoulder encouraging you to “go ahead and just eat it… you’ll do better tomorrow.”

It’s not always easy, but try these alternative plant-based  recipes:

I believe that one of the secrets to maintaining a diet you love (not really a diet, but a lifestyle of eating) is having foods that you love.

So, let’s add this vegan cream spinach to your list of recipes that make the cut and also, make you healthier. Feel guiltless eating this vegan creamy spinach and make it a tradition to years to come!

I’d love to hear your feedback in the comments below for this Vegan Creamed Spinach recipe! If you have a photo, post it on my Facebook page, tag me using the hashtag #plantbasedcooking in your caption, and I won’t miss it! 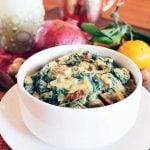 This savory dish is a great addition to your holiday meal. The tempeh bacon is optional. Use left-overs over toast for a satisfying meal.
Prep Time25 mins
Cook Time45 mins
Total Time1 hr 10 mins
Servings: 4 people