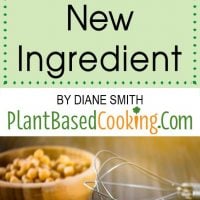 Are you a vegan foodie who stays up to date with the latest and greatest in plant-based trends? Well, whether that describes you or not, if you’re at all into the plant-based lifestyle I want to make sure you’re in the loop when it comes to aquafaba, which according to Bon Appetit magazine is today’s “hottest ingredient.” 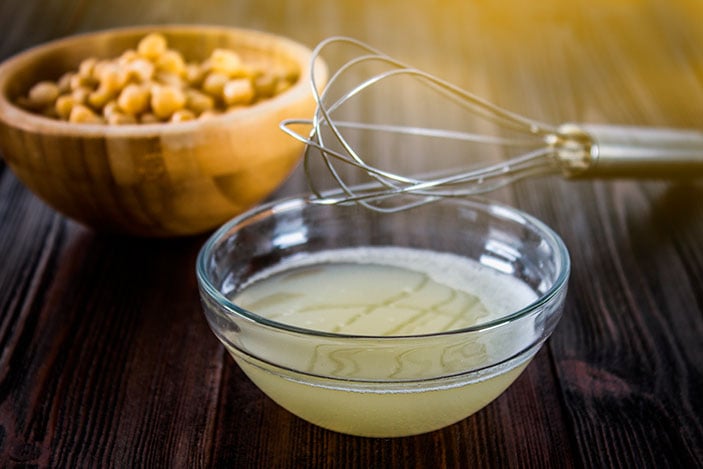 Aquafaba, you ask? What in the world is that, you may be wondering? (And no, it’s not yet another new brand of toothpaste, laundry detergent or dishwashing liquid!)

While it may sound a bit like a household item or personal care product, “aquafaba” is actually a newfangled name for the oh-so-ordinary, otherwise seemingly insignificant liquid created when chickpeas or white beans are cooked.

You know that slightly-foamy, viscous fluid you usually pour down the drain without so much as a second thought when you open a can of beans? Well, that gooey stuff that canned beans are sitting in, yup, that would be it. Welcome to aquafaba, the best things to happen to plant-based vegans since, well, hummus and chips.

At long last, after years of putting up with sub-optimal egg replacers such as applesauce, tofu, flax and chia seeds, bananas and additive-laden, highly-processed commercial egg replacement products, we’ve finally got not only the perfect solution when it comes to whole eggs, but an effective replacement for the that elusive, crucially-important non-vegan ingredient, the egg white. Aquafaba combines some of the essential components of both yolks and whites and can be used as a thickener, binder, emulsifier, foaming agent and other purposes.

And thanks to the Norwegian Food Research Institute, we now know that aquafaba is composed primarily of starches and proteins. These compounds migrate from the beans to the water during the cooking process, to the tune of about 5 percent of the dry beany material in the aquafaba.

A whole new universe of plant-based baking and cooking has opened up – go ahead and let your mouth water as you think of your favorite flavor meringue, creamy vegan mayo on your favorite sandwich. (And while it’s true that the cooking liquid from a variety of beans can be used as egg replacers, the cooking liquid from chickpeas and white beans, such as great northern beans, seems to work best.)

The name “aquafaba” comes from the Latin words for water, “aqua,” and beans, “faba,”and coined by United States-based software engineer Goose Wohlt. Wohlt is the creator of Goose’s Vegan Cookery website and is the person credited with the discovery that chickpea liquid is an ideal vegan egg replacer.

The name “aquafaba” was in turn adopted by the international community of vegan fans and explorers who gather together to confer online, sharing recipes, successes, suggestions, and failures in the Facebook group, “Aquafaba (Vegan Meringue – Hits and Misses!).” The rather active group currently has more than 85,000 members. If you’re curious about aquafaba recipes, you might want to consider joining yourself.

How It All Went Down

While Wohlt is credited with discovering aquafaba, he was in actuality building, directly and indirectly, on the vegan cooking experiments and discoveries of a number of intrepid plant-based egg-replacement pioneers who came before him, such as French tenor Joel Roessel. In December, 2014, after a series of intentional food experiments, Roessel discovers that the cooking liquid from legumes and hearts of palm could be made into a cooking foam.

Roessel’s foam, however, wasn’t stable in and of itself and necessitated the use of gums and stabilizers which are beyond the capacities and inclinations of many basic home vegan cooks. (For a complete timeline related to the discovery of aquafaba, visit http://aquafaba.com/history.html.)

In 2015, a few months after Roessel’s discovery in what appeared to be an unrelated event, a couple of French foodie guys demonstrated in an online video, “Le Defi FUDA,” how you could whip chickpea cooking liquid into foam and mix it with chocolate ganache (whipped chocolate and cream) for an authentically fabulous French chilled dessert.

The issue here was that their chilled chocolate ganache didn’t involve the use of added sugar or baking, both integral parts of many dessert preparations. And that’s where Wohlt comes in.

After seeing the vegan French ganache video, Wohlt set out to see how the foam could be deployed in the creation of a stable baked vegan meringue, complete with added sugar. To his surprise, he found that plain chickpea cooking liquid when properly prepared and without any added gums or stabilizers, was by itself a perfect substitute for egg whites.

Easy to Come By and Easy to Use

You can source aquafaba from canned or home-cooked chickpeas or white beans. If the liquid seems too thin off the bat, reduce the aquafaba until it’s the same consistency as egg whites by boiling just the liquid without the beans in a saucepan.

The general rule of thumb for substitutions is three tablespoons of aquafaba for one whole egg, two tablespoons for egg yolks, and one tablespoon for egg whites.

If you’re baking something fluffy such as a cake, remember to whisk the aquafaba first until it’s foamy and white, and then spoon fold it into the cake batter with a metal spoon to prevent the bubbles from popping.

For mouth-watering aquafaba recipes, check out The Vegan Society, Michelin Guide or Self, to name just a few websites. You’ll soon see that the internet has loads of aquafaba recipes that you can access with a simple search. Do some aqua-surfing and see what strikes your fancy!

Well, there you have it! Welcome to the brave new world of vegan plant-based living where you never have to feel deprived again! 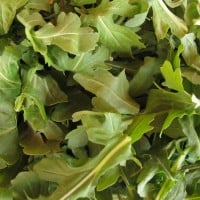 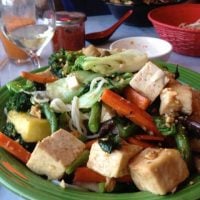 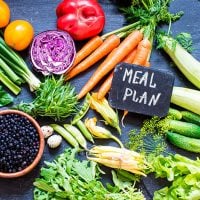