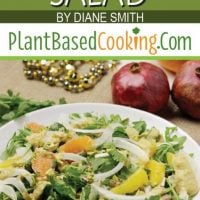 This wonderfully bright, tangy and rich Arugula Orange Fennel Salad is great any time of the year, but you might want to serve it with my Plant-Based Moroccan Holiday Menu.

A typical Moroccan meal begins with a series of hot and cold salads, followed by a tagine (usually meat), but my plant-based Moroccan fennel salad version is vegan, of course.

In addition to this orange fennel salad, the menu includes:

Fennel has a bit of a licorice taste and I like it best raw if it’s sliced quite thinly. You can also roast fennel as it’s delicious served warm. If you’re not familiar with fennel, it’s a large white-light green bulb with long stems and fronds (see the photo).

See the short video below that shows you how to prepare fennel for salad and other vegan fennel recipes.

You won’t want to miss these delightful salads:

For the arugula fennel orange salad photos, I used fresh oranges. I accidentally purchased two different types of oranges which you see in the photo but that makes it so colorful.

I’ve also included the option of using canned mandarin oranges instead of fresh but you can make that call for yourself. Peeling and segmenting oranges takes a little more time and I’ve included a video about how to do that, as well.

Once you’ve thinly sliced the fennel, toss it with the orange segments, and pistachios. Make the dressing in a high-powered blender by adding the pistachios, orange, apple cider vinegar, low-sodium soy sauce, and ginger.

Don’t worry if you still have bits of nuts in the orange and fennel salad dressing as they add crunch. And, I might add some important oil that helps us assimilate all of the nutrition in the greens.

Once you’ve tossed everything except the arugula with the dressing you’re ready to serve vegan fennel salad. Each plate gets a handful of arugula and is topped with the dressed ingredients and topped with a sprinkling of cilantro.

How to cut fennel for salad

How to peel and Segment an Orange

I’d love to hear your feedback in the comments below for this Arugula Orange Fennel Salad recipe! If you have a photo, post it on my Instagram page, tag me using the hashtag #plantbasedcooking in your caption, and I won’t miss it! 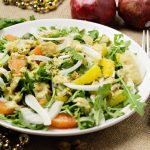 This wonderfully bright, tangy and rich Arugula Orange Fennel Salad is great any time of the year, but you might want to serve it with my Plant-Based Moroccan Holiday Meal.
Prep Time25 mins
Total Time25 mins
Servings: 8 people