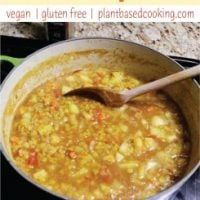 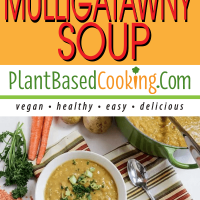 This Vegan Mulligatawny Soup has been on my favorite list for quite a few years. At some point, I fell in love with Indian food. And, it’s a bit surprising given that I was not exposed much of any unique cuisine growing up.

It was standard American fair, meat and potatoes. Although I did love the white bean soup my mother often made.

Although the ingredient list is long, it’s mostly spices. You do need to get your chopping chops going, with a good, sharp knife. It’s that way when you’re eating a plant-based diet, isn’t it?

If you’re staying away from all added oils, you could use coconut extract as a substitute for the lite coconut milk by mixing 1 teaspoon with 2/3 cup non-dairy milk. It’s certainly creamy enough without if you blend part of it.

Pair this delightful soup with a salad:

The addition of lots of garlic, ginger, and turmeric, as well as, all of the veggies, makes this an immunity and anti-inflammatory powerhouse.

Bringing together your soup after prepping

After water sauteing the onions and garlic, add all of the veggies and spices. Then it’s a matter of tossing in the tomatoes and veggie broth.

I like to let this simmer over medium-low heat for about 30 minutes until the veggies are nice and tender. You can puree part (or all) of the soup at this point. Then put back into the pan, add the coconut milk and heat through.

Serve with some crusty bread and a large lettuce salad. This vegan mulligatawny soup is a warm and cozy addition to your day.

I’d love to hear your feedback in the comments below for this Vegan Mulligatawny Soup! If you have a photo, post it on my Facebook page, tag me using the hashtag #plantbasedcooking in your caption, and I won’t miss it! 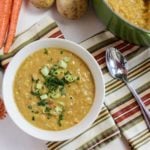 *I recommend using Ceylon cinnamon because the other common cinnamon, cassia, contains coumarin, a compound that may be toxic to the liver at doses of 1 teaspoon per day for adults and 1/4 teaspoon for children a few times a week. See reference from nutritionfacts.org.