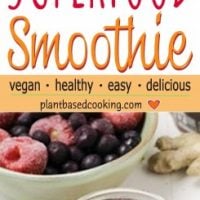 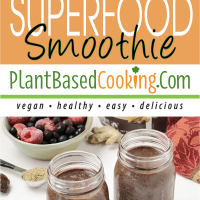 Rick Bruess takes it in stride when his wife of 33 years, Laura, teases him about how long it takes him to make his signature “Superfood Smoothie” each morning for breakfast (see the complete recipe below).

The retired Boulder couple are long-time vegans and competitive runners, and the Superfood Smoothie is essential for fueling their athletic pursuits, maintaining good health and staying off medications.

Fueled only by plants and plant-based foods, Rick, 58, runs 70-75 miles a week, while Laura, a record-breaking competitor coached by Rick who holds a number of track records for women her age, runs 60 miles a week.

Rick may be good-natured about Laura’s teasing, but the Superfood Smoothie is no laughing matter for him. This highly-unusual blended health tonic is something he carefully developed through independent, exhaustive nutritional research. For Rick, it’s well worth the time and energy it takes for him to stock and organize the many ingredients and prepare the smoothie daily for Laura and him.

Homemade ingredients to add to this Smoothie and other Plant-Based recipes:

The Superfood Smoothie grew out of a decision Rick made to take a serious health matter into his own hands.

“The reason I started the smoothie was back in December 2011, I ended up with some nerve damage. I was just walking around the house one morning and all of a sudden my left foot started going numb, and then the bottom of my leg, and then a few hours later the pain started. By the afternoon I was in the emergency room because I couldn’t take the pain. It was all just out of the blue.

“Nine different neurologists and four MRIs later, they all concluded, ‘Your back looks awesome, it’s not the disc pinching the nerve.’ What they eventually came up with was that a virus had attacked the nerve root at the fifth lumbar vertebra. I went through a few months of bad pain and numbness.

I don’t have much of an anterior tib (tibialis anterior, a muscle on the outside of the shin bone) muscle anymore, it atrophied because of the nerve damage. I was trying to do something to get myself as many nutrients as I could to regenerate that nerve, and that’s how I got motivated to come up with the healthiest smoothie I could possibly create,” Rick said.

“He couldn’t run at all,” Laura said.

“I had foot drop and a lot of the muscles weren’t functioning. They thought it might be West Nile virus, I don’t know why they didn’t test for that, I know I’ve seen mosquitoes in November,” Rick said.

“Doctors were telling me that maybe the nerve could maybe grow back but there are no guarantees. I was trying to do something to help get as many nutrients as I could to regenerate that nerve and get back to running again. That was my initial motivation for coming up with the healthiest you could possibly come up with. I started working right away on developing it. It’s changed a bit over time but not hugely,” Rick said.

Unlike a lot of smoothies, this one has no bananas.

“He researched it and only put in the things that are super beneficial like we don’t put bananas in there, I mean they’re fine, but they’re not as good as those other ingredients,” Laura said. “The most nutrient dense things you can eat he put in there.”

All that hard work, research, and self-determination has delivered some big health dividends – Rick’s signature smoothie appears to have worked. About four or five months without running, there was dramatic improvement.

“My smoothie got me running again,” Rick said happily.

Today, Rick is entirely free of pain but not entirely healed. In addition to his atrophied anterior tibialis muscle, he still has a slight foot drop when walking and some numbness in his foot and lower leg.  But when it comes to his quality of life, the main thing is, he’s running every day and has been for years.

The Science of Smoothies According to Rick Bruess: An A-Z Superfood Ingredient List

Amla (Powdered) – “Also known as Indian gooseberry, amla powder is probably one of the top two or three superfoods when it comes to antioxidants. It’s been studied for its anti-cancer properties, there are tons of studies on it. It’s not really the vitamin C that’s the big deal, it’s all the other micronutrients. Go to nutritionfacts.org and you’ll find some really interesting information.”

Berries (frozen) – “I think berries, in general, are the best fruits you can eat, they’re more nutrient dense than other fruits. I don’t even worry about the sugar because if you’re eating the whole berry it has a much different effect than if you’re just drinking juice, you don’t get that sugar spike when you eat the whole fruit.

I use unsweetened strawberries, acai berries, cranberries, and blueberries. I’m kind of anti-juicing just because I think you’re removing a lot of the fiber and all that other good stuff that make fruits and vegetables beneficial.”

Black pepper – “Black pepper combined with turmeric super amplifies the effect of turmeric, exponentially, like a hundred times more effective.” (Turmeric is also in the smoothie, see below.)

Broccoli sprouts – “Broccoli sprouts are a really good source of sulforaphane, which has been shown to have amazing anti-cancer properties. In sprout form, they say that a pound of broccoli sprouts is equivalent to eating 75 pounds of regular broccoli! I grow my own sprouts from seed and they take 5 days to grow. I use a device, it’s a plastic cup with little slits on the bottom.

Broccoli sprouts are a little bit tougher to grow than other sprouts because the seeds are smaller and you don’t want to let them sit in water. Rinse the seeds with water twice a day and then spin the device with your hand to get excess water out, you want them damp and not soaked.” (Rick’s sprouter: Frontier Natural Products Co-op 8505 Sproutamo Easy Sprout Sprouter – Kitchen Gadgets)

Cardamom – “This study showed that if you had a cup of blueberries a day it would increase the natural killer cells that you have by 100 times or something. If you then added cardamom to that, it would make not only more natural killer cells, but they were way more effective at killing cancer cells.”

Cherries – “I base my use of sweet cherries on a study that showed that sweet cherries have a more powerful anti-inflammatory effect (COX-2 inhibitor) than tart cherries.”

Cinnamon – “They’ve found that the particular type of cinnamon is important. Use Ceylon cinnamon, not the more popular Chinese cassia variety, which may be toxic to the liver in larger quantities.  Ceylon cinnamon is another good antioxidant and has great flavor.”

Cloves – “Just a pinch of cloves has a ton of antioxidants.”

Cocoa – “I use non-alkalized cocoa powder. Cocoa is high in antioxidants and some studies show it may be anti-cancer.” (Alkalized cocoa is washed with a potassium carbonate solution to make the cocoa less acid and more alkaline, and it has a darker color than natural cocoa.)

Dates – “Dates are a good source of potassium and fiber.”

Flax seeds – “They say flax seeds are something that you really should have every day. They’re high in lignans, which have shown promise against breast and prostate cancer.” (Lignans are phytoestrogens or plant estrogens that resemble human estrogen, which are believed to have many health benefits. Flax seeds are by far the best source of lignans, although they are found in other foods, such as red wine, fruits, vegetables, and whole grains.)

Green and Hibiscus tea – “I just figured instead of putting in soy milk or a milk of some kind that green tea has all these properties of extending life, being anti-cancer, just being great for you. Hibiscus tea was found to have even more antioxidants than green tea has, just seems like a better fluid.”

Kale – “Kale is a nutrient-dense green with lots of fiber and lots of calcium. It’s really high in antioxidants and good for bone health. Spinach and chard are high in calcium but they’re also high in oxalates, which block the absorption of calcium, so kale is better for calcium.”

Seaweed (powdered) – “We don’t really add salt to anything. I added a bit of powdered seaweed to make sure we’re getting iodine, which is usually found in iodized salt. I would say only use this if you’re not getting iodized salt.”

Sesame seeds – “Sesame seeds are one of the plant-based foods highest in calcium and they’re also high in phytosterols, which are really good at lowering bad cholesterol and increasing good cholesterol.” (Phytosterols are plant compounds that are chemically similar to human cholesterol, and are believed to promote heart health.)

Turmeric powder – “Turmeric is another one of those super foods with anti-cancer, anti-inflammatory, and anti-arthritic properties, tons of studies have been done. Laura takes extra turmeric and black pepper because it’s good for her joints.” 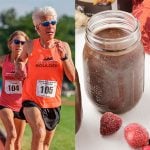 Rick drinks 4 cups per day and Laura drinks 2. *This post contains 2 affiliate links. If you purchase something through the link, it will help support plantbasedcooking.com *I recommend using Ceylon cinnamon, which has a sweeter, more delicate flavor, because the most common cinnamon, cassia, contains coumarin, a naturally occurring compound that may be toxic to the liver at doses of 1 teaspoon per day for adults and 1/4 teaspoon for children a few times a week. See reference from nutritionfacts.org.