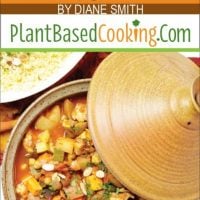 Our family’s meal this holiday will be a little non-traditional. We’re making a plant-based vegan Moroccan dinner and the main dish is this Moroccan Chickpea Vegetable Tagine. If you haven’t heard of a tagine, it’s a piece of bakeware used for making the dish with the same name.

A typical Moroccan meal is made up of cold salads for starters, followed by tagine and couscous topped with vegetables or meats and usually includes fruit for dessert. If you’d like to see the full menu, visit my article, “Plant-Based Moroccan Holiday Menu.”

My version of this vegetable tagine is a sort of sophisticated vegetable stew filled with spices that are similar to those used in Indian cuisine, spices like cumin, coriander, cinnamon, ginger, cardamom, and the like.

Tagines also usually include some type of dried fruit such as raisins, dates or apricots. This dish uses dried apricots. Oftentimes it can also include olives and/or nuts.

I found this beautiful ceramic tagine on Etsy and it’s specifically made to use in the oven or even on the stovetop. It’s a festive presentation when serving to guests as you open it to reveal the beautiful vegetables inside. Serve couscous on the side. 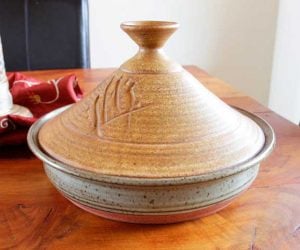 There is also a larger version of couscous if you prefer. Here’s one I found from Bob’s Red Mill

If you’d prefer, you can always use a different “grain” such as farro, brown rice, barley, or even quinoa for a gluten-free version. 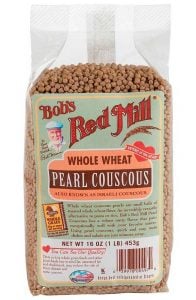 I like to make the stew in a large pot on the stovetop by first sauteing the onion and garlic in a little vegetable broth but, if you have a tagine dish, you can actually make it in the tagine dish.

After adding the tomato paste, tomatoes, and spices, I add all of the chopped vegetables and enough vegetable broth to just cover. This can be done earlier in the day and set aside until later when you want to finish the dish.

I then put it all into the ceramic tagine and pop it into the oven to bake for another 45 minutes or so until the vegetables are tender. Of course, you can continue to cook on the stove or use an oven-friendly dish instead of the tagine bakeware.

It doesn’t take much to fill up your pot since 3 red potatoes, 1 large sweet potato, zucchini, and cauliflower do the trick, but what’s fun about a recipe like this is that you can add your favorite vegetables.

The addition of broccoli, butternut squash or green beans would work as well.

I’d love to hear your feedback in the comments below for this Moroccan Chickpea Vegetable Tagine recipe! If you have a photo, post it on my Instagram page, tag me using the hashtag #plantbasedcooking in your caption, and I won’t miss it! 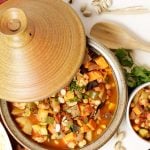 A plant-based vegan tagine perfect for your holiday guests and full of nutritious vegetables, dried fruit and Moroccan spices. It makes a beautiful presentation and can be served over your choice of grain.
Prep Time25 mins
Cook Time45 mins
Total Time1 hr 10 mins
Servings: 6 people

*I recommend using Ceylon cinnamon, which has a sweeter, more delicate flavor, because the most common cinnamon, cassia, contains coumarin, a naturally occurring compound that may be toxic to the liver at doses of 1 teaspoon per day for adults and 1/4 teaspoon for children a few times a week. See reference from nutritionfacts.org. NOTE: If you have a tagine baking dish that's safe, you can cook on the stovetop.
Harissa Spice and Salt are not included in the nutrition label.